Now That They Are Gone

I admit. I was a bit apprehensive Monday morning as we sat in the pre-op area of Sibley Hospital. With my IV in, numerous consent forms signed, redundant questions like "what's your full name and birth date" repeated and answered, we waited to meet the anesthetist, and my surgeons. Liz held my hand and rubbed my head as the tears came. It was clear I was sick. Very sick. And I needed a team of professional medical folk to make me better. My biggest unknown was whether there was residue cancer still in my breast and that - god forbid - it had spread to my lymph nodes. 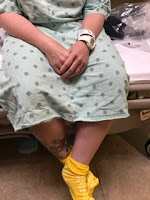 To locate the lymph node that would tell the surgeon important information, she needed to located the "sentinel node" that first node in the series of nodes throughout the body and see if it contained cancer cells. A large man named Carl entered my pre-op area with what looked like a tiny metal tool box. Inside that tiny box was some sort of nuclear medicine that my surgeon - under Carl's watchful eye- would inject into my left nipple and then continuous massage throughout my breast while holding me down from running out of the room. Not pleasant. 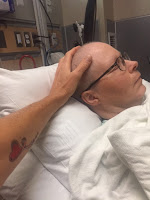 My surgeon would then locate my sentinel node via a Geiger counter - ???? during surgery. Remove it and then have it biopsied while I was on the operating table. If the node was positive, the surgeon would continue to remove nodes until she was certain she removed all with cancerous cells. Apparently as a backup to the nuclear thing I will also injected with blue dye during surgery. I peed blue for 24 hours.

My surgery was scheduled for 4 1/2 hours and I was out in 2. Luckily I do not have any complications with  anesthesia and within 30 minutes or so I was reunited with Liz and wheeled up to my room. I was up roaming the ward within a few hours and I spent a night in the hospital - BTW, Sibley has great Mac n cheese and carrot cake. After quick consultations with both surgeons early the next day, I was released and went home.  I'm always so thankful for the nursing staff. I was well looked after and well taken care of.

Liz has been a trooper with keeping up with yet a new list of meds ( I'm on a steady diet of valium and Cipro) and emptying my drains every eight hours. I got my first look at my new chest and while I did shed a few tears, I knew it meant for me I was on my road to healing - and it would be ok. It will be a big relief to us both to have the drains pulled as early as Tuesday of this week. 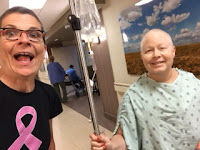 This coming week brings a slew of followup appointments with my plastic surgeon to see how I'm healing and hopefully have the drains removed, with my cancer surgeon to discuss what she found, with my radiologist to see if I need further treatment, and with my oncologist to help us interpret all of it.

I very much want to say that I'm a cancer survivor. That I'm ready to move onward with my life. To honor those who battled this disease  before me. To be there for those who will battle it after me. To do what I can to play a part it finding a cure. Fuck Cancer. 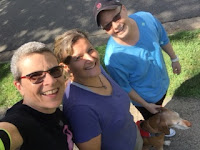