Like the sound of those words. As of my surgery on July 24th, I no longer have cancer. 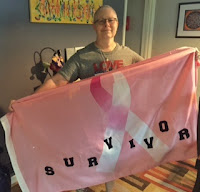 
But enough of the scary news. Right now I'm now cancer free. And from a medical "standard of care" definition, I have completed my cancer treatment. I'm done.

You see from the very beginning of this fight, I told Liz I would go beyond my treatment (regardless of the outcome) and enroll in a clinical trial. Whether or not the trial helped me, I wanted to play a part of helping women who will come behind me in this fight. To do that, you can become a participant in a clinical trial. You volunteer to join the medical professionals who are giving their careers to finding a cure for you and others like you. Clinical trials are specific- meaning the participants selected for any trial must meet rigorous characteristics and protocols.

Post-surgery, my oncologist was excited about a clinical trial currently being run out of the National Institutes of Health (by the way, people who work there are super heroes and literally life savers). The results of my surgery discovered my tumor had shrunk 90%. And my entire medical team was thrilled about those results. Me, being of type-A over achiever ilk, was looking for 100% (referred to in the medical world as "complete pathological response" or "pCR"). According to the most recent research, complete pathologic response rate of approximately 15%-18% is seen among patients with all breast cancers, and the pathologic response rate in patients with triple-negative disease is quite a bit higher, maybe as high as 30-35%. This is in part because triple negative breast cancer reacts well to chemotherapy. But I got a 90 percent response and I will take every percentage .

To qualify for this specific clinical trial, one had to have a certain percentage of "residue disease" or cancer left after chemotherapy but before surgery. My oncologist called a few days post surgery to give me "good news and bad news". The good news being obviously a 90 percentage shrinkage is terrific, but the bad news was to qualify for this trial, one needed a higher percentage of residue disease before surgery. That's ok. I didn't want to "qualify" for that trial, anyhow! So at the moment, there are no trials out there that I meet the criteria for.

However, a clinical trial presented at the 2015 San Antonio Breast Cancer Symposium on December 2015, known as CREATE-X, was actually stopped early, in 2015 when it became clear that the drug, Xeloda had benefits for women with triple negative cancer with residue disease post surgery. 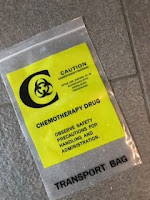 While this drug has yet to become part of the "standard of care" for cancer patients like myself, my oncologist, Liz, and I agreed that given what we know about my disease and my willingness to continue care, I would start yet another round of chemotherapy - this time using Xeloda - to give me the best chance known of survival. I suspect I will begin this next round in the coming week. We are looking at 18-24 weeks on this drug, if I can tolerate the side effects. It is a pill that I will take at home, twice a day for two weeks and have one week off for 6-8 rounds. I will be closely monitored by my medical team while I am on the chemo as before. I look at it as my "maintenance drug". Women who have other forms of breast cancer take medication 5, 10, and 15 years post original diagnosis to keep cancer from reoccurring. My type of cancer has no known medication so I will throw another chemo drug at it, continue to look for clinic trials that I qualify for, and remain positive and to lean on my wife, and our village of family and friends to get us through. So keep rooting for me.  Keep Liz in your thoughts (and occasional email). 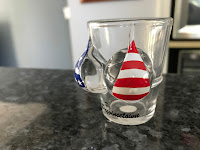 And so I move onward. Cancer free and determined to stay that way. Oh and boob-less.
Cheers!!!
Posted by JJB at 11:17 AM 1 comment:


A little girl joined the world on July 24th. She may have been one of some 250,000 babies born in July, but this baby is special. She and I will share an amazing bond to thrive for existence on this earth that she may never fully realize – neither may I – for the rest of our lives. 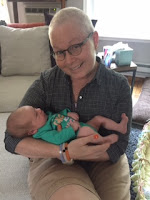 You see, her parents are neighbors. And when I started chemo in February of this year, Liz felt better about me driving to work if someone would ride with me. Liz – for those of you who are not aware – rides her bike and or runs into work each day. It’s something she cares deeply about, it’s good for her emotional and physical health and she has been doing it for years. Her life had been uprooted enough already with all this cancer-related stuff and I did not want her to lose this piece of herself. So I would continue to drive to work, but we would ask my work colleague – and neighbor – if he would drive into work with me every day.   Mike agreed. He proved to be a wonderful commuting partner. We share a love of Africa and travel and conversation was easy.  Shortly thereafter, he announced he and his wife Kelly were pregnant and Kelly became a regular commuter, too. I truly enjoyed our rides to and from work. I found myself less stressed about traffic and the stupidity of fellow drivers. We were never at a loss of conversation. The dad-to-be and I shared many conversations about his newly found awareness of what it takes to be female in this world even before his baby girl was born. She would have to be smarter, stronger, tougher. Hearing how their pregnancy was progressing and how they as a young couple were readying themselves for the arrival of their first born was awesome and entertaining.

As I struggled through my 20 weeks of chemotherapy, and dealing with my fears for my life, listening to - and watching – their baby (shortly determined to be a girl) thrive for her life was a welcomed distraction – and amazing to see firsthand. Each day it seemed Kelly was getting bigger and the baby girl was getting more and more active. You knew she was a fighter.  We were both fighters. Each of us struggling to get to the next day, to participate in the world, to live. There were many times I caught myself from just losing it in the car on I395 at the thought of how juxtaposed our lives were at that point in time. There was this young couple discussing how they were checking off a long list of “honey to dos” to be ready for her arrival: painting the nursery, installing doors on open cabinet storage areas, etc., while Liz and I were focused on scheduling doctor appointments, handling the shitty side effects of chemo and just trying to hold on and holding it together until the next day.


Her nursery was ready, her dog, Tank, was ready, her parents were ready, she was ready. She was due to enter the world July 31. If she arrived early and before my last day in the office before my surgery, the plan would be for me to get Mike and Kelly to their house where they’d pick up the “go bags” and be on their way to the hospital. I was overjoyed to share in the plan to help bring her into this world. But alas, July 21 came and went and she was not yet ready to make her entrance.

My surgery, scheduled for 7:30am on Monday July 24th consumed me that weekend. It’s a lot to take in: waking up to no boobs was the slightest of my worries. How much cancer survived the 20-week chemotherapy? Had cancer gotten into my lymph nodes – your body’s highway to anywhere and everywhere. Ugh. 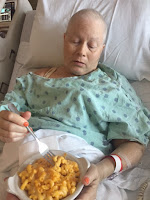 In my room, post-surgery (and before I ordered mac n cheese and carrot cake to celebrate), Liz looks at her phone and gasps. What?! I say. What’s wrong? (what could possibly wrong?). Nothing, Liz replied. She had let Mike and Kelly know I was out of surgery and they in turn sent a picture of the young parents and their little girl, Winny. She had entered this world about the same time I became cancer free. For so many reasons, she will be forever in my thoughts each year at this time. You can bet I will be sending her a birthday card to honor and celebrate her every year in this world as well. Happy Birthday to us both. #Onward