Today I begin 18 more weeks of chemotherapy. Honestly, I'm scared. I know (or have a good idea) of how this particular drug (although different from my other chemo drugs) will make me feel: fatigued with GI issues and sore hands and feet. Yet, I open the bottle of pills that are now sent to my house and take two at breakfast and two at dinner. Increase to three at breakfast and three at dinner for the second week. Fourteen days on, seven days off - for six rounds, eighteen weeks. And hold on. 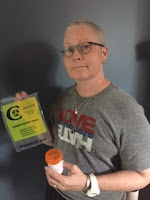 We are prepared should the known side effects, listed earlier, begin to surface. This drug like the others produce their crappiness on a accumulative basis. They get worse as the weeks on go.

All of this because I want to be a part in out how medical professionals and the women who will come after me in this fight can better manage, defeat and prevent cancer. Breakthroughs in research and medical care have come via clinical trials. I know the care I received, the techniques of my surgeons, the confidence of my oncologist were the results of these efforts. Of the brave women who came before me, who volunteered to try new drugs, new regimens, undergo new surgeries. Some of which worked, some sadly that did not. I wish to pay that forward.

So my team had been looking for a clinical trial for me since my diagnosis. Sadly, there aren't as many as you'd think. The protocols and requirements to be included in a trial are extremely stringent. You have to have a specific type of cancer, have had a certain prior chemo protocol (or not), be of a certain age, live nearby (or reasonably so) in order to participate in the treatment and/or evaluations, etc. Many trials involving triple negative breast cancer are focused on metastasized cancer. Cancer that has returned and is very difficult and or impossible to cure. I suppose this is because triple negative cancer is the most aggressive of all breast cancers. Chances are decent that this bastard will return. Finding a cure for when it does is certainly critical.

Coming out of surgery, however, my oncologist mentioned a trial, being conducted by the National Institutes of Health (NIH), that sounded promising. The purpose of the "Eastern Cooperative Oncology Group" or "ECOG" ,  according to "ClinicalTrials.gov : "This randomized phase III trial studies how well cisplatin or carboplatin (platinum based chemotherapy) works compared to capecitabine in treating patients with remaining (residual) basal-like triple-negative breast cancer following chemotherapy after surgery (neoadjuvant). Drugs used in chemotherapy, such as cisplatin, carboplatin and capecitabine, work in different ways to stop the growth of tumor cells, either by killing the cells, by stopping them from dividing, or by stopping them from spreading. It is not yet known whether cisplatin or carboplatin is more effective than capecitabine in treating patients with residual triple negative basal-like breast cancer."


Because I did have "residue cancer" post-chemo, it seemed I would qualify for this trial. I fit all of the multiple qualifying factors and qualifications to be a participant and the trial - involving over 560 women- was nationwide and my hospital, Sibley, was the local participating institution. There was only one factor that could disqualify me. Just how much residue cancer did I have as opposed to how I needed to have to qualify. Well, as my oncologist said several days post-surgery: "I have good news and I have bad news."  As it turned out, I did not have enough residue cancer to qualify for the trial - that was the good news by the way, along with the fact that neither lymph node removed during surgery showed evidence of cancer.

One of the drugs being used in the ECOG trial had already gone thru a "successful" trial in Asia. The CREATE-X study, presented at the 2015 San Antonio Breast Cancer Symposium, showed to increase disease-free and overall survival rates of folks like me. This result coupled with the fact that capecitabine, or Xeloda, is a pill you take at home verses via IV, is "less toxic" than its counterpart drug in the ECOG study, and that I had a 50/50 chance of being randomly assigned to either drug had I qualified, we have decided to "shadow" the ECOG trial by taking capecitabine (Xeloda) for six rounds (18 weeks) as prescribed by the trial.

Today is Day One of the next eighteen weeks - my "maintenance drug" meant to keep this bastard from ever returning. And while I'm not officially participating in the ECOG trial, I hope whatever happens to me - during treatment and after - can be helpful in making care and treatment strides for women who will fight this battle after me. 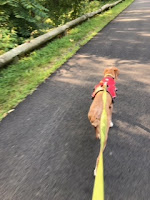 I plan to keep up my daily morning walks with Bettie and add in increasing time on my Concept2 Rower to strengthen and stretch my chest. For as long as I can. I've healed extremely well from surgery. And yea, I don't miss putting on, tugging at, and otherwise managing a bra, in case you were wondering.

We have two big trips planned this fall - I don't plan to miss either. We are contemplating our futures. What they hold and where they unfold. We are looking forward. Keep rooting for me.
Posted by JJB at 12:21 PM