So, where did I leave off. Oh, I remember. Back to DC to get a second scan of my chest because the first scan I had in February was because I was complaining of a cough and tightness. Well, that scan showed my lungs were clear, BUT something else funky. The lymph nodes under my clavicle that lit up the first scan in February have returned to the rightful sizes. All good. EXCEPT now the CT of my abdomen (which I got because I’m needing to prove I’m cancer free in order to qualify for a clinical trial – more on that later) shows a cyst – or something – on one of my kidneys. You have to be kidding me?! Ok, OK, OK…the oncologist gods have proven they are right about scanning!  I totally get it now!  NO SCANS.  The “cyst”, however, is NOT cancer, so everyone assures me.


I have started to inch myself back into the working world. Through luck, good timing and a fast rapport with a fellow White House staffer, I have found myself consulting part-time for a wonderful non-profit based in Fort Lauderdale focused on the elderly population in Broward County. I need to build up my concentration and stamina for an eight-hour day. Plus, I want to be sure what I do professionally for the remainder of my working life continues to uphold and is line with what I’ve been lucky to have done previously. It has to matter. I have to be making a difference in the world. Even a small portion of it like one county in one state.  I enjoy the work and the mission. For now, it’s fitting it nicely with my life. 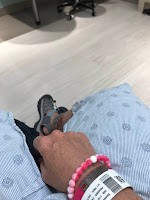 Back in Fort Lauderdale, Liz and I traveled to Miami earlier this week to see one of two oncologists on my new “fuck cancer” team roster. Both women are top in their field and based out of world-renown Sylvester Cancer Center at the University of Miami.  The purpose of the visit is to review the results of the DC scans and to find out our next steps with regard to “qualifying” for the clinical trial (I promise, more on that later). It is also time for my wife and number one care-taker and chief advocate to ask her questions to the doctor about the clinical trial, and to voice her concerns about seeing her wife go through more chemo. Ugh, there’s that – more chemo – as a part of the clinical trial. But, I promise more on that later…First things first.


As I was told in DC, the scans are clear of cancer. However, the “cyst” on the kidney, while not disconcerting to anyone in the room of the five women medical professionals (it seems my new oncologist likes to travel with what she calls her entourage – U of M is a teaching hospital), we do need to figure out what it is. So, an MRI has been scheduled for later in the month. Forchristssake. AGAIN, another test to chase after a previous test result.  Oh, and I need a bone scan, too.  As it turns out, the part of proving you are cancer free is proving it hasn’t settled in the bones. So, I have to have a scan of my bones, too.  Oh, and if the bone scan finds any kind of arthritis, I will have to have an MRI to rule it out! Knowing that this 54-year old, previous catcher body surely something like that will turn up.  I scheduled the bone scan ahead of the MRI for my kidney hoping that if anything lights up in the bone scan, they can rule it out in the MRI. Fingers crossed my scheduling cleverness works out.


Personally, it was also one of the hardest days since being diagnosed with cancer.  A friend I met in an online support group for cancer survivors. Who was diagnosed with my breast cancer, Triple Negative, at the same time as me. Finished chemo the same time as me, had her surgery the same time as me.  Who I traveled to meet in person when Liz and I were upstate New York last fall as we were both struggling through the “extra credit” of Xeloda. Such a lovely, caring, YOUNG, strong woman, found out last night her cancer returned. In her lungs and her liver. I cried for hours. I cried for her. I cried for me. I am scared. For her. For me. For all of us with Cancer. And I am pissed. I hate Cancer. It’s so unfair. So unforgiving. So fucking unfair!

I've heard people say, trying to be supportive, I suppose: "we all die sometime. Any of us could get hit by a bus at anytime. You have to just live your life". Yea, I get that. But you are blissfully unaware the bus is coming at you. We in "Club Cancer" are acutely aware there's like a gun at  our head. Maybe loaded. Maybe not. And every once in a while the trigger gets pulled. You hope to hell the gun's not loaded. Scans are like the trigger getting pulled.

She told me she will fight. And I will continue to fight right beside her. We cannot do it alone. Give to a cancer organization today. Support me in my efforts to again raise funds for cancer support (more on this year’s “challenge” later). Volunteer to drive someone to chemo. Help us. Be there for us. Vote for us, as we ARE pre-existing conditions. Keep rooting for us!
Posted by JJB at 6:45 AM